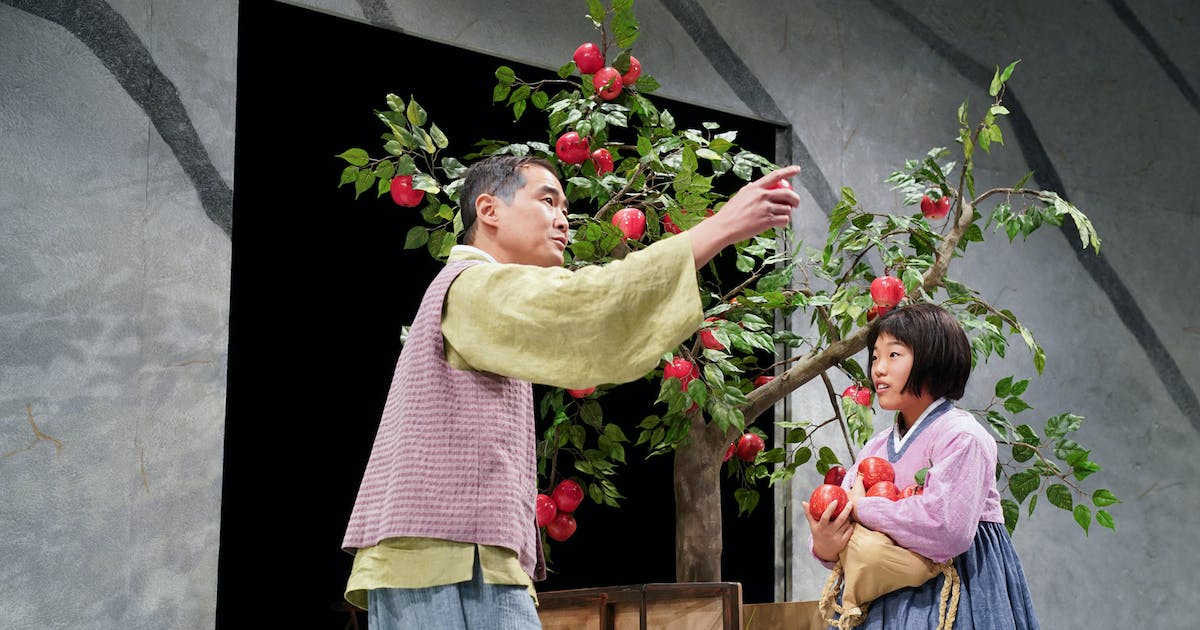 ‘Bina’s Six Apples’ is sweet, moving and full of symbolism

From the Garden of Eden, where the forbidden fruit is popularly depicted as an apple, to the time of Sir Isaac Newton’s light bulb, when he is said to have invented the law of gravity after being hit on the head by an apple, the fruit of the genus Malus has historical significance in our culture.

With “Bina’s Six Apples”, playwright Lloyd Suh pleads for another riff from this tree of knowledge. In Suh’s big-hearted play, which had its world premiere Friday at the Children’s Theater Company in Minneapolis, fruit is a source of wonder and nourishment. They wield power like magic pearls. And they help keep a resilient, smart, and resourceful 10-year-old on his way to a hoped-for family reunion.

Well-acted and moving, “Bina’s” is set in 1950 war-torn Korea when a fearful father calls out to his daughter in the dark. He finds her sitting under an apple tree as the lights come on. The father (Albert Park) tells Bina (Olivia Lampert) that war is approaching and the family must leave immediately for a two-day journey on foot to Busan, the port city 70 miles to the south, also known as the name of Pusan.

Bina is reluctant.
“I hate the ocean,” Bina told her.
“You like the ocean!” Father answers.
“I hate Busan,” Bina continues.
“You haven’t even seen him.”
“I hate war.”
Because of the lines, Father is silent for a while, then fumbles for words.
“Me too, Bina.”

This revealing triptych captures the poetic tone of Suh’s single-act single-act, which runs for 75 minutes. Although this must-see original work is set at the Children’s Theater, you don’t need a companion child as an excuse to see it. Take yourself adult with a friend (vaccinated and masked) or two.

The design elements all help to evoke the emotions and world of the piece. The action takes place on Jiyoun Chang’s alternate set which is comprised of gray wall panels with rolling props on hand carts, which are also lit by Chang. Junghyun Georgia Lee designed the drab, olive-tinged costumes, and Fabian Obispo did the music and sound design.

“Bina’s” is as much a game as a fable. The half-dozen apples the child carries in his backpack, each destined for a family member on the run, carry metaphorical weight. The fruits also exert an attraction on the people Bina meets after a bomb attack separates her from her family.

A gifted young actor, Lampert uses expert timing and total self-control to invest the title character with youthful innocence and wisdom. She nails her monologues, including a remarkable one during a river crossing.

Bina is determined and kind and Lampert plays her with the calm assurance of a young person born with an old soul. This equanimity is a great choice as the character negotiates a landscape dotted with moral and amoral characters who all deal with the effects of war.

This cast of characters (and they really are characters) includes a determined merchant whose love language is buying, selling, and trading. This role is played by the perfect Sun Mee Chomet, who also plays the role of mother.

Bina also meets a deserter full of secrets (Joseph Pendergrast, who indulges in his 18-minute scene) as well as a funny boatman (Park in his second major role).

As is clear, most of the cast members play multiple roles, including helping change scenes by pushing carts. Chomet invests Bina’s mother with war weariness and patience as she carries what she can on a long weight distribution pole on her shoulders.

Pendergrast as Brother Jinsoo, Shelli Delgado as Sister Youngsoo, and Elizabeth Pan as Hamee, the grandmother whose charge is wisdom, also wear things as members of Bina’s family.

Actor Jayden Ham plays Boy, a trembling and restless young man who waits for his mother to return to a village that has been destroyed.

It’s somewhat compelling in a show that doesn’t dwell in the obscurity it started out in. Instead, “Bina’s,” heading to Atlanta’s Alliance Theater after its run in Minneapolis, finds resolution and comforting light.