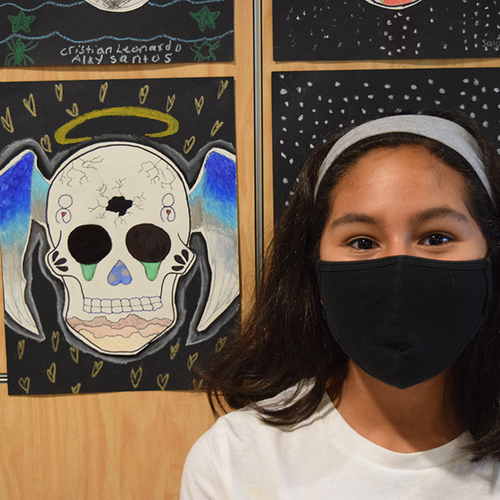 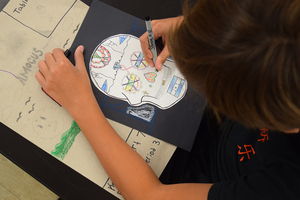 “We discussed the meaning and symbolism behind Día de Los Muertos and looked at images of altars and real sugar skulls,” Spreter said. “Some students even shared their experiences celebrating this holiday with their families.”

Before beginning, the class discussed the symbolism of sugar skulls, which are often used to decorate altars during the holidays. To complete the project, each artist had to use at least two different symbols in their work, whether traditional sugar skull symbols or something more personalized.

The designs created were as colorful as they were unique.

“I went with a freedom theme,” said Samantha Sanchez, whose design featured large blue wings, mountains, and intricate cracks. “The wings symbolize flight, the mountains show how far you can go when you are free, and the cracks on the skull represent the release of your spirit.”

Alexandra Berger’s design had a garden theme and featured different flowers. She explained that hers was dedicated to her dog. “He loved playing in the garden,” she said.

Andrea Cobos also had a design depicting flowers, but she described her theme as a “transition” noting that she used marigolds as they are often used on ofrendas, or altars, the Día de Los Muertos.

The difference in meaning in the girls’ seemingly similar design choices showed just how personal sugar skull designs are. The students enjoyed finding meaning in symbols that were almost like a secret code in their lives.

“I really liked how we were able to express our creativity with this project,” Alexandra said.