Google has said it will ban all payday loan ads. This is not the case.

In May, when Google announced it would ban all payday loan advertising through its AdWords service, Consumer Advocates were delighted. “The ban on predatory payday loan ads shows that Google is ready to put people before profits,” exclaimed Wade Henderson of the Leadership Conference on Civil and Human Rights.

But months after the policy is implemented, brokers who link borrowers to payday lenders are still buying Google ads. They seem to have easily circumvented corporate rules, leaving consumers still vulnerable to the traps of high cost debt that can ruin their financial lives.

Under Google’s rules, which went into effect in July, advertisers for what they call “personal loans” can be banned if they demand full repayment in 60 days or less, or if they have an annual percentage rate (APR ) greater than 36%. This eliminates all payday loans, which are usually due within two weeks and have an APR of well over 300%.

The terms of the loans should be stated in a disclaimer on the site. The policy applies to direct lenders as well as those who put borrowers in touch with third parties. “We want to protect our users from deceptive or harmful financial products,” Google’s rules say.

But today, a simple Google query for “payday loans” yields a number of paid links at the top of the search, from companies like GOInstallmentLoans.com, WeLend2U, and QuickLoanTree.

They are not payday lenders, but what are called “lead generators”. They take consumers’ personal information, build a credit history, and then sell the file to payday lenders, depending on the type of loan they can afford. Lead generators can get up to $ 200 for a good lead.

“Hiding behind lead generators allows breakdown companies to bypass state law,” said Jordan Birnholtz, co-founder of PawnGuru.com, a website that connects consumers and pawn shops. Birnholtz first discovered lead-generating ads because he tracks keywords to see how users get to his site.

Lead generators are covered by Google’s policy. But the warnings from the various companies are almost comically vague. “Rates start as low as 6.59% -35.8%”, the “Fees and interest»On GoInstallmentLoans.com. But “For those who do not meet the minimum conditions for a personal loan, alternative loan solutions may be offered”, where the above rates do not apply. This negates the whole purpose of posting tariffs.

A loan ad from GoInstallmentloans.com.

QuickLoanTree advises that it “cannot guarantee any APR”. He nevertheless says: “The maximum annual percentage rate (APR) is 35.99%”, but quickly adds that “the lender can provide an APR that is different from our range”. Success loans, a separate lead generator, uses the same language. WeLend2U advises that consumers “may be offered loans with APRs below 36% and payment terms ranging from 61 days to 60 months or more.” But it does not guarantee these rates, and further in its terms and conditions it adds, “The lender determines all fees and rates based on the information provided in the registration form”, making the rates they display without relevance.

CashAnytime, another lead generator, said the same that consumers can get a 36% APR loan due in more than 60 days, but “not all lenders can provide the maximum amount or the terms advertised.”

Alone BadCreditLoans is close to meeting Google’s standards, claiming that borrowers “can” get loans on terms that meet Google’s policy guidelines. They are the only site to prominently display a representative example of the total cost of the loan, as required. 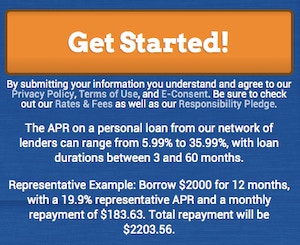 An advertisement for Bad Credit Loans.

“Although things have improved, it seems that some [lead generators] are, as you might expect, trying to bend the rules, ”said Gynnie Robnett, campaign manager for Americans for Financial Reform, a coalition of consumer groups.

This is extremely common for the payday lending industry, whose business model relies in part on bypassing regulatory barriers to get high-cost loans into the hands of clients. Payday lenders have claimed exemptions from state laws because they operate on sovereign tribal lands; they sold loans online inside the breakdown windows to bypass government interest rate caps. It is only natural that they use similar tactics to circumvent the internal rules of a private sector company.

In a statement, a Google spokesperson said, “We continue to implement our policy and will take action against advertisements and advertisers that are not in compliance. These actions include removing ads and permanently banning advertisers from using AdWords. “

The company also claims that more than 3 million offered ad placements have been turned down since they implemented the policy change, and thousands of advertiser accounts have been suspended or sanctioned. According to Google Blog, in 2015, they disapproved of 780 million ad placement ads offered for a range of abuses, including phishing scams and counterfeiting. “We always update our technology and policies based on your feedback and work to stay one step ahead of scammers,” Google writes.

But despite these attempts, the lead-generating ads that advertise on Google are almost defiant in their obvious attempt to sell expensive payday loans to consumers. Their disclaimers are self-negative and do not commit them to serve any type of loan to a borrower.

“If Google wants to maintain this policy, it should maintain it,” said Jordan Birnholtz of PawnGuru. “It is not a difficult task to look at a few pages on the website.”

According to data from PawnGuru, millennials who use alternative financial products are three times more likely than other age groups to start their research online; Birnholtz says the ads target young people with low financial literacy. And with Google, the dominant search engine for Internet users, adherence to their policies largely dictates the ads Americans see.

Under Google policy, individuals or consumer associations can report ads that violate their standards. But as of October 5, lead generator ads with questionable warnings were still running.

Advocacy groups that supported Google’s policy change continue to support them. “We expect some in the troubleshooting industry to try to play with the system,” said Scott Simpson of the Leadership Conference on Civil and Human Rights. “Google is doing the right thing; predatory lenders continue to be predatory.

Top photo: The Google logo is on display at the company’s headquarters on October 18, 2007, in Mountain View, California.