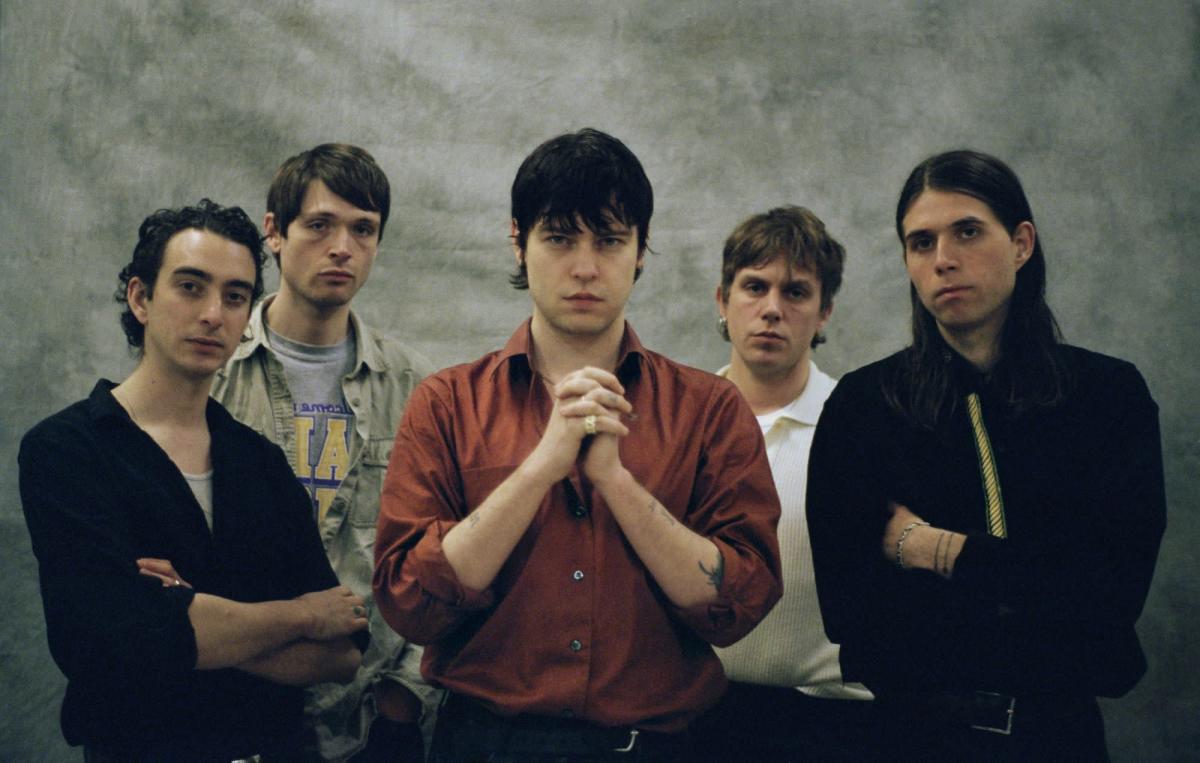 Iceage’s Elias Bender Rønnenfelt on the crime, poetry and symbolism of the new album

Click here to read the full article on SPIN.

At the end of the Danish music scene, nothing really made waves in the world. That is, until 2011, when post-punk band Iceage emerged from Copenhagen with their debut album, New Brigade: a strong, abrasive and slightly disturbing sound held by the resonant voice of Elias Bender Rønnenfelt.

Controversies ensued, tarnishing the band’s early image – and leading at accusations to sympathize with far-right ideologies. In one recent Fork interview, Rønnenfelt vehemently claimed that the group is “certainly not from the right,” adding, “We have no sympathy or leanings on that side.

On top of that, Rønnenfelt belongs to the long tradition of interview frustration, deconcentration and general non-compliance – he was once double “rock’s toughest frontman” when it comes to dealing with the press, which he has particular disdain for and openly hated, time and time again.

Knowing that, I was a little apprehensive about our FaceTime audio call. Still, Rønnenfelt was what could only be described as amiable and outspoken, but maybe that was because I intercepted him on his Friday night in Copenhagen. After a mandatory apology for picking up on the fourth ring, the muffled background noise lessens as it goes away. He speaks with a certain constraint and insults, hesitates when he collects a thought. A few minutes later, however, I was surprised at how cooperative he was and how unbearable my membership in the music press was—opposing qualities I had been predisposed to.

Iceage’s fifth album, seek shelter, was released on May 7, and it’s their most eclectic yet. They didn’t trade their use of power band instruments so much as they sucked up its full potential and sent strings, brass and a whole choir of gospel to sufficiently translate their new outpouring – and it’s monumental. It’s an all-encompassing project that spans from vaudeville and Americana to psychedelia, histrionics and drunken singalongs, while retaining the stridency on which they were founded. This only goes to show that Iceage is anything but singular. They’ve gone through a total creative overhaul with every album they release and they’re not letting up now.

SPIN: With the new record, the band has entered uncharted territory for themselves. It feels less sinister and brooding; sometimes even light and there are even slow songs. Some say you have matured, whatever that means. So where does this change come from?
Elias Bender Ronnenfelt: Fuck knows, I guess. But you mentioned more adult? I hate this notion. If a little light was allowed in the music and there’s some vulnerability to showing some degree of compassion, I hate that that automatically means you’ve matured in some way – than that should somehow mean that you have arrived somewhere. Maybe we come from a linear brooding line. But I don’t think because there’s an element of education in music that this feeling [means] that you have arrived somewhere, that you have reached some sort of final, adult form. I think it’s just a broadening of the palette rather than being some kind of individual who’s like, “Okay, well now I see some sense of clarity”, because it’s not the case.

Why did you include a choir in this album, and how was it with a choir? Did you orchestrate the sound, or was it spontaneous in the studio?
Well, after doing that for a while, you write songs and nurture and nurture ideas until they start to coalesce into a sort of album-like song formation, and, in our case , this means that they are usually based around guitar, bass and drums. Then you begin to hear inner things that are not available to you. You start to hear sounds that don’t exist. A gospel-style choir seemed like a no-brainer. They came, and I don’t have a lot of technical knowledge — I’ve never worked with a choir before; I felt a little scared to do it, honestly, and stupid. So they completely understood it and just breathed life into it. It felt like a natural conclusion to everything.

It’s kind of a multi-layered harmonic thing, more than you can hum with your mouth, so it’s kind of trial and error. Maybe I have an idea for a melody and they play it. But then you hear a whole orchestra in your head, but you don’t know how to articulate that, so they’ll try something and you’ll be like, “No, that’s way too happy; make it more sinister. Then you’ll think, “This is way too sinister; make him morose or make him hungrier. You kind of have to speak in quaint language until you get something that sounds like what’s going on in your head.

It seems like you tune in to all these different headspaces for this pretty varied album. Are there certain headspaces that you know and revisit to fish out a certain song that you have in mind?
So far, all the compositions on an album have basically been written and I know what state I’m going into the studio, then I’m going to release 10 days, two weeks or whatever. Maybe I’ll go to another city, maybe I’ll borrow some kind of space in Copenhagen, and sit with it. Sitting with your notebook, you have all your worries, your intuitions, your impressions or everything you have experienced since the release of the last album. It’s a kind of source material.

Maybe like a case with “Drink Rain” I’m not some kind of freak that hides at night drinking from dirty rain puddles in order to get closer to a girl I like or something that, but that kind of deranged character can emerge just sitting there. So you never really know what’s going to pop up, but most tend to be ingrained in your mindset over the past year.

Yeah, the songs almost read like poems. Do you write poems and then adapt them into song lyrics or do you write songs to sing?
Well, I write poetry that’s not related to songwriting. I started doing this about two years ago, but otherwise, no. I don’t mix them either. I pick up a notebook whenever I feel like it, and then songwriting is all that happens.

Have you ever considered publishing these poems?
I finished them, and it took forever to edit that shit, but I was so tired of watching it that I haven’t really looked for a way to get it out since I finished it. So, um… I don’t know. I think I’ll take them out. I can’t be fucked.

Do you have any favorite poets?
I mean, yeah, there are things that come to mind that I’d rather not mention almost. In fact, I hated poetry for most of my life, going to high school before giving up. I thought poetry was such a dirty and cheap way of writing because in school you had to. Well, you have some kind of vague poem, and then the teacher brings it to you to read everything in it. And it’s like, “Okay, I’m doing all the work here,” and I just thought that was lazy literature.

But God, I was wrong. Later I found it to be such a beautiful thing, and the way it flows through you can actually alter the way you feel the way a song plays. A song that you just push to play, and it floats in the air and you feel a different type of path. I think poems can work the same way. So, yes, I was wrong.

What is the difference, do you think, between a song and a poem?
One has music and the other does not. [Laughs.] I mean, it’s fucking obvious, isn’t it?

Yeah yeah. [Laughs.] I meant strictly in terms of written form. Would you write something different for a poem rather than a song?
That’s what I found really difficult because I realized that all I really did to write was lyrics, and I often felt held back in lyrical form because you have your verses; you have your choirs; you know how many lines are going to be there; you know they have to accommodate the punctuation. So you’re sort of filling in the blanks. Sure, it’s not as related as that, but you know what I mean. But when I then started to take writing seriously outside of lyrical form, suddenly you’re completely frameless. So that means there are no limits to when things stop or start, and when things are open and you have endless options left, it’s so much harder than when you actually have a set of constraints for yourself. So, in a way, I found it much more difficult. Because who knows when he’s doing his job?

Your lyrics are steeped in symbolism and the music videos are littered with symbolism. The group has its own icon. What is the use of symbols?
We tend to lean towards archetypes or stories, and I think that’s something in my way of making sense of the banality, in the same sense that there’s an urge to lean towards those kinds of comparisons . It’s like falling in love. Falling in love is commonplace. It does not mean anything. It is arbitrary; It’s usual. It is, in the grand scheme of things, anything. But yet, somehow, every friend I’ve ever had – you know, like when they’re heartbroken – it means everything to them. This is the most important thing. So we want to reach almost biblical proportions to make sense of what is ultimately completely normal. With songwriting, I make mundane emotions more meaningful if I can reach things that aren’t mundane.

I read somewhere that you said you were fascinated or interested in crime, and the lyrics and the music video for “Vendetta” are proof of that. So what is it about crime that you find so fascinating? How does he find his place in Iceage?
I think crime is so close to everyone, and a lot of people really have no fucking idea. A lot of people grow up in a way that they don’t even see that it’s staring back at them. And I think that even if you engage in politics or whatever side of politics is presented to you, crime is just an ever-present glue that holds everything together. It doesn’t matter what class of society you belong to. But it’s pervasive, and it’s ironic in the sense that the law that punishes crime is the same that still breaks it. I grew up seeing crime everywhere. I’ll venture out into the world, and it’s correct the, correct below the surface. You don’t have to scratch very hard to find it. It’s something we can talk about.

Opinion: Mere symbolism? Mere statements of fact? In a constitution there is no such thing