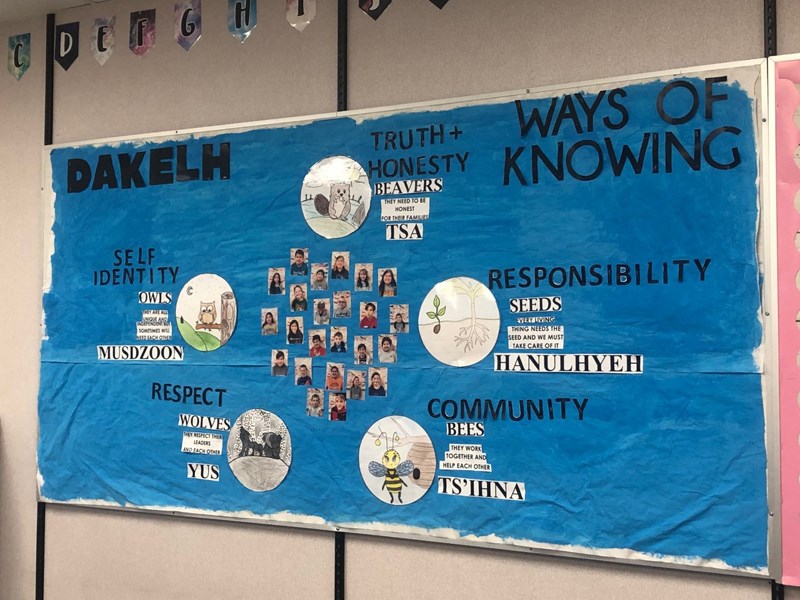 Is it difficult to say a few words in Dakelh?

Dakelh words can seem difficult to pronounce for two reasons. One is spelling. If you’re unfamiliar with the language and its writing system, you don’t know what sounds the letters spell. Our experience of English makes us think that the pronunciation of words from other languages ​​may need to be learned word by word. Fortunately, reading and writing Dakelh is much easier than English. English has many sounds that are spelled in multiple ways, letters that can be pronounced in multiple ways, and silent letters. Dakelh does not. Once you know the system, you can almost always correctly pronounce words you’ve never seen before.

The other difficulty is that Dakelh has sounds that English does not. The largest group of unknown sounds are what linguists call ejectives or glottalized consonants. All speech sounds in English are created using air pressure from the lungs. When we do /t/, for example, we press the tip of the tongue against the alveolar ridge, the bony ridge at the back of the upper teeth. This closes the front of the mouth. Then we build up pressure behind that closure with our lungs. When we stick our tongue down, away from the alveolar ridge, the air rushes in. Sounds in which air pressure comes from the lungs are called lungs.

To do the ejective counterpart, /t’/, we do the same with the tongue, but we also press our vocal cords together, closing the trachea at the Adam’s apple. The trachea, the back of the throat and the mouth now form a closed, curved tube. If we raise our larynx about a centimeter, we increase the pressure in the trapped air. If we now move the tongue away from the alveolar ridge, the air rushes in, producing a sound similar to an English /t/, but with more of a cracking or popping sound. Dakelh has a whole set of such glottalized sounds, written with an apostrophe following the letters for the pulmonic versions. Once you know them and have listened to a few examples, it’s not hard to learn how to make them and tell them apart from their lung counterparts.

Perhaps the least familiar sound is the one spelled “lh”, as in “Lheidli”. It’s made much like an English /l/, but without vocal cord vibration, and with a more turbulent airflow. It looks a bit like the “th” in “thin” followed by an “l”. A European language has this sound: it is the sound written “ll” in Welsh. The reason English has two versions of the same name, “Lloyd” and “Floyd”, is that English speakers weren’t quite sure what to make of that Welsh sound.

The non-English sounds of Dakelh are found in most other native languages ​​of our province as well as languages ​​in other parts of the world. The fact that children become familiar with more of our human speech capacity will give them a head start in language management later in life.

Here is a list of the many resources available to learn more about Dakelh. There is also a clickable alphabet chart for the Lheidli dialect and a Lheidli dictionary which contains many audio entries.

Bill Poser is a writer from Prince George, a research consultant for the Yinka Dene Language Institute, and the author of Carrier Language: A Brief Introduction.