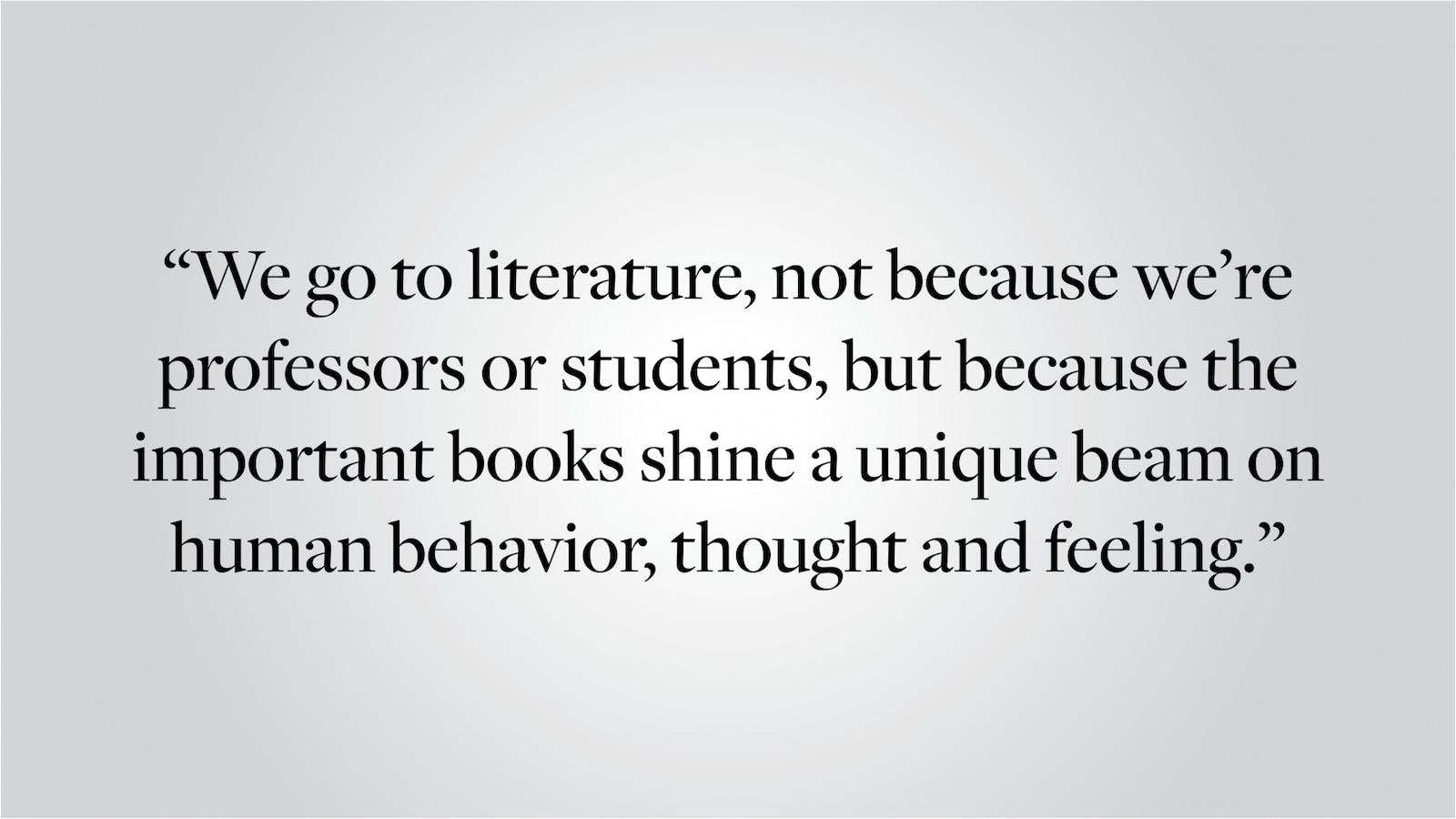 Letter: The Case for Studying Literature at Brown

One of the few virtues of being old is having a personal sense of history. If I look back in time, it is obvious to me that nobody needed to plead the cause of literature in the past, because it was obvious that literature was alive and well in the Brown program: lots of enrollments , a lot of hubs.

Those days are over. Enrollment in comparative literature courses has plummeted at Brown, as it has across the country. The old “liberal arts” model is fighting for its life, given the enormous prestige of STEM fields and the understandable concern in the minds of students that a concentration in literature might be an uncertain proposition in terms of to find a job or possibly to pay his student. debt. There are major headwinds against spending a lot of time reading novels and poems.

Lately, I find myself increasingly struggling with the question: why literature? At the end of a career, one is assailed by such existential questions, since they concern a whole life in the trenches, and curiously, they are rarely answered. Yes, we have a multitude of courses dealing with ancient and modern cultures spread throughout the University, but have we addressed the central question: what do we really learn in a literature course? I assign novels, poems, and plays, and my students read those novels, poems, and plays. What type of takeout is actually involved? And how does that stack up over time? When I myself, now an old man, think back to the courses that meant the most to me as a student decades ago, what stood out to me, added not only to what I know but also who am I?

It has always surprised me that we teachers are in the dark about what we have “achieved” in our courses. Surprisingly, there is very little longitudinal feedback. Yes, we receive e-mails or letters from former students, but there is no real accounting of this gang. Why doesn’t the University contact its alumni, asking them every five or ten years, “What did you learn in your concentration at Brown?” I realize that there are alumni questionnaires that ask these questions, but my views are on existential as well as informational questions. “What has your focus meant to you?” is the most difficult and delicate question. I suspect that students would struggle to give substantive answers to such questions. Literature offerings, in particular, are clearly not “how-to” or “problem-solving” courses: what purpose do they serve?

As an identical twin – only our closest friends at school could distinguish between Arnold and Philip Weinstein – I have a much more blurred picture of human contours than others, and a stronger sense of identity is a more mobile and promiscuous element than we often realize. . Also, my identity as a twin has shaped my way of thinking when it comes to reading literature. I’m sure you don’t read a novel or a poem the same way you read math or physics or economics – or even history or philosophy. It’s going to sound crazy, but I think we read literature to become different. After all, reading, say, Sophocles or the Brontës or Kafka or Morrison involves “inhabiting” – for the duration of the reading experience – the minds and hearts of these characters. No other domain asks or even allows you to do this.

Now, I am well aware that this last paragraph will be dismissed – probably mocked – by most of my colleagues in Brown’s literature departments. On the contrary, the professional model of today advocates objectivity – even distance – as a central element of our negotiations with the texts that we read. “Identifying” with the text is generally considered to be the trap set for unsuspecting readers. The many schools of criticism represented in major universities – focusing on crucial issues of race, class and gender in their old and recent formulations, all tied to operations of power and ideology that help shape subjectivity itself -even – are often wary of “reader identification”. .” So I’m definitely the odd man out on that front. Nevertheless, I will not back down.

Let me stir the pot even more by facing the biggest question behind all of your choices at Brown, pointing to the real elephant that’s been in the room: what’s in it for you? After all, the folks at Brown University have enough on their plate without being burdened with pious injunctions to read, read, read. . . Literature. What is worth doing? I’ll answer that with a question I asked a friend who had spent her whole life making Shakespeare programs. My question: What do you know about Shakespeare? His answer: not as much as he knows about me. Not as much as he knows about me. Chew that up a bit. We go to literature, not because we are teachers or students, but because important books cast a unique beam on human behavior, thought, and feeling. Reading these books adds something unique not only to our database, but to our real identity. Because we have never finished discovering who we are.

Revealed: The Secret Words IT Pros Use to Describe YOU

The best phrases use words to paint a scene