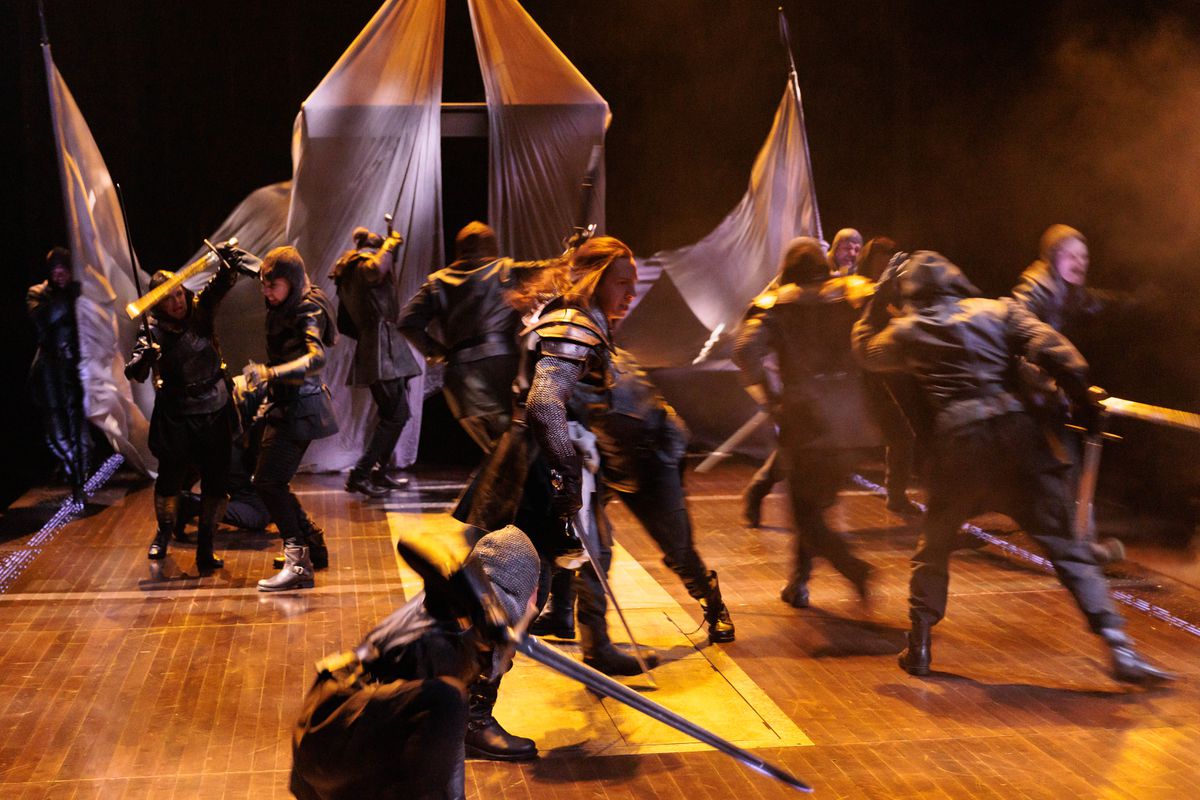 Stay up to date with the Nestruck on Theater weekly newsletter. Register today.

It’s finally been a glorious summer for the new Tom Patterson Theater at the Stratford Festival.

A Richard III featuring Canadian stage icon Colm Feore opened Saturday night in the $70 million complex’s 600-seat auditorium. It’s the first production to have the chance to properly show what space can do besides looking pretty on the River Avon, as it has done, half-closed, for the past two pandemic years.

This in no way diminishes the great pleasure that comes from simply approaching and entering this light-filled building, exploring the pleasant curves of its elegant wraparound halls while waiting for the hour of the curtain.

But an audience member will only feel like a true explorer upon entering the auditorium’s U-shaped seating area, which now involves descending instead of ascending; it’s like descending into the hull of a giant ship.

The space is acoustically sunken, and the disappearance of all ambient noise is immediately noticeable, almost unnerving, as you embark on your theatrical journey ahead.

Richard IIIled by Stratford Artistic Director Antoni Cimolino eagerly showcases all that is sonically possible in this intimate space.

The power-hungry hunchback of Feore whispers, hisses softly and hisses his famous first monologue – “Now is the winter of our displeasure made glorious summer by this sun of York” – and the hushed sibilance of all these esses is like a snake hissing right in your ear.

For the play-ending Battle of Bosworth Field, on the other hand, Cimolino unleashes a flurry of flashbangs from above that might have you covering your ears. This space can also provide a stunning surround sound show. (Inaugural sound design is by John Gzowski.)

The Patterson’s long, thin stage – what Stratford calls an elongated thrust – bears a strong resemblance to the ancient stage found in the shabby-chic building of the same name that once stood on this same site.

But Cimolino’s production quickly demonstrates its hidden secrets – like the traps that lead to spacious compartments below. These allow Richard de Feore to emerge at the start of the show from an archaeological dig site, designed by Francesca Callow to evoke that of Leicester where the king’s real bones were unearthed under a car park ten years ago.

Patterson’s old scene had different kinds of traps that directors and designers could fall into. There was always a production there every season where, apparently in response to the limited scenic design possibilities of the catwalk scene, designers instead went beyond the confines of elaborate, historically-inspired costumes – and turned the pieces into runway shows. of fashion.

That’s pretty much the case here with Callow’s sultry beautiful costumes; the men are hidden under heavy coats, the women engulfed in flowing dresses. Too many actors are forced to play entirely with voice and face – and some of those faces are even half-covered in long, disheveled hair in the name of medieval realism.

This leads to some performances feeling disembodied, some scenes to look like boring pageantry; indeed, the pre-intermission part of this richard has enough lengths to allow you to understand the lighting plan of the new auditorium as you wish.

Ironically, playing the disabled Richard, Feore is the only performer allowed to fully integrate his body into his performance. Tracing his bloody path to the throne of England, he frolics with surprising agility across the stage even as his feet and legs each point at odd angles and one arm droops. Dressed in a neat black outfit and a historically accurate bowl cut, he shows he can act with every inch of himself, even his exposed eyebrows.

The Richard of Feore does, indeed, have different abilities – the fact that his body moves in unusual ways apparently allows him to make powerful moves, which others around him don’t time until it’s too late. . It’s a stark contrast to the rather heady performances the actor has been giving mostly recently at Stratford in macbeth Where King Lear; Feore is in great shape here.

For this production, Cimolino processed Richard III as a true piece of history, eschewing the abbreviation in order to highlight how the Duke of Gloucester and his right-hand man Buckingham (Andre Sills) are exploiting already existing divisions among the English royal family to take over. In Richard’s accession to the throne, Cimolino sees “a model of tyranny”.

For anyone who hasn’t recently refreshed their Henry VI Parts I through III, however – pieces Stratford hasn’t touched in 20 years, not without reason – all those machinations involving hard-to-distinguish male characters with dreary names such as Gray can be opaque.

The female characters are, as always, much more fascinating in their brief appearances: Jessica B. Hill’s defiant then demolished, Lucy Peacock’s prickly Queen Elizabeth and Seana McKenna’s cursed Queen Margaret – so frightening that she would appear without any doubt in a mirror if you’ve said his name three times.

It’s the murders planned and executed before us that are most engrossing – starting with that of Clarence, the soul of Michael Blake, who nearly convinced his assassins to back down, before his body was unceremoniously thrown into the one of these new traps.

The death of the young princes is more ghastly than ever: Hilary McCormack makes a terrifying impression as the traumatized Tyrell who takes on this blockbuster job while Cimolino, meanwhile, manifests a hitherto hidden Cronenbergian taste for cruelty in his setting. on stage.

Richard III is first produced in the new Patterson primarily as a nod to the first play ever performed at Stratford in 1953 – but its delayed premiere means it comes at a time when the play is again widely in vogue.

The Royal Shakespeare Company in the other Stratford is also opening a production this month, with a disabled actor playing Richard for the first time. Likewise, the Public Theater chose him for its 60th edition of Shakespeare in the Park in New York; Danai Gurira stars in the title role – and Tony-winning actor Ali Stroker, who uses a wheelchair, plays Lady Anne.

Expect a lively debate on disability and representation in Richard III to ensue – with the Stratford production, albeit housed in a beautiful brand new building, molded like the old guard.

Keep up to date with the Nestruck on Theater weekly newsletter. Register today.