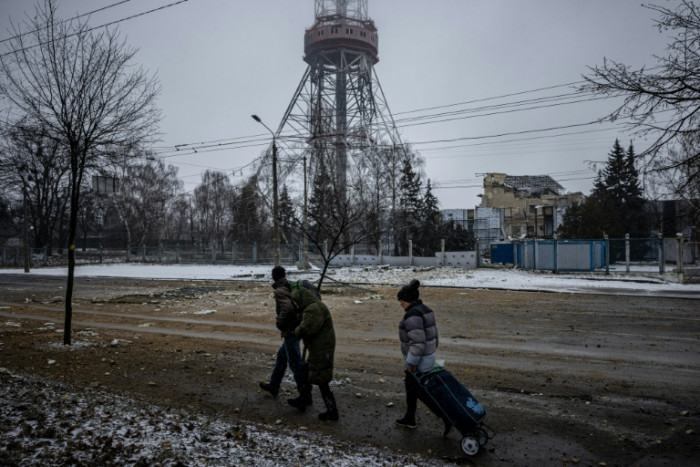 State broadcasting resumed with a backup antenna shortly after the missile damaged but failed to topple the tower.

KYIV: Eighty years after the Babi Yar ravine served as a mass grave for 30,000 Jews murdered by the Nazi occupiers of Ukraine, five more corpses lay on the ground on Wednesday covered in dust and a thin layer of snow.

A father, mother and their teenage son and daughter were killed as they left a store full of groceries ahead of kyiv’s nighttime curfew.

A fifth body was that of a TV journalist, judging by the press card police found on him and showed to AFP, after Tuesday’s Russian attack on the capital’s TV station .

State broadcasting resumed with a backup antenna shortly after the missile damaged but failed to topple the tower.

The symbolism of a strike next to Holocaust graves has had an impact far beyond the city.

First the tower itself, broadcasting news from the Ukrainian government as it attempts to rally citizens against the Russian invasion.

“This tower is our symbol of truth, free media and real information. It is our reality that they are attacking,” said Volodymyr Rudenko, a 50-year-old lawyer and defense volunteer at the scene.

The burglar alarm at the destroyed store was still ringing unnecessarily and the soldiers struggled with the gray plastic sheeting as they began to move the corpses no one had dared touch the previous night.

But the location of the tower, now littered with twisted debris, is also another symbol.

In 1941, the German occupiers of kyiv during World War II shot 33,000 Jewish prisoners at Babi Yar. A memorial to the massacre stands a short distance from the tower, so far intact.

Sounds are muffled by the falling snow, but an air raid siren sweeps through the park and a group of sculptures dedicated to the victims, including a huge Menorah.

Ukrainian President Volodymyr Zelensky, himself a Jew, reacted with outrage to the strike.

In a video address, he complained that under Ukraine’s former Soviet regime, authorities had built the television tower and a sports complex in a “special part of Europe, a place of prayer, a place of memory”.

“Outbuildings. They built a park there. To erase the true history of Babi Yar… It’s beyond humanity,” he said.

“Such a missile strike shows that for many people in Russia, our Kyiv is completely foreign. They know nothing about our capital. About our history,” he said.

“But they have orders to erase our history. Erase our country. Erase all of us.”

“It’s symbolic that the Russian army attacked the cities of Kyiv and Kharkiv,” he said, as Ukraine’s second-largest city came under a much tougher shelling than Kyiv, partially surrounded but intact.