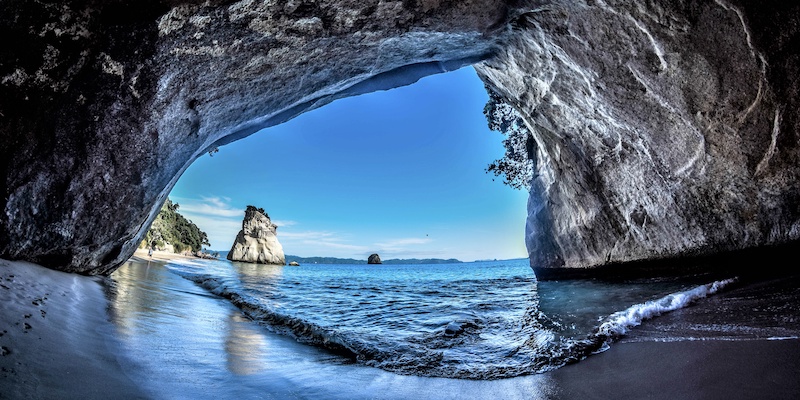 New Zealand / Aotearoa (as the Maori, the first settlers called it, “The Land of the Long White Cloud”). The general perception, encouraged by travel agency websites and brochures, is of a peaceful and beautiful country. Two long islands and a smaller round one below; a slightly broken exclamation point at the bottom of the South Pacific. The most used adjectives are pure, spectacular, unpopulated. And the people? Kiwis (as we affectionately call the five million or so of us who live here) are commonly described as friendly, welcoming, easy going.

I think that’s why many readers, especially those living abroad, were shocked by my latest novel, The pointing stick. The mountainous setting of the west coast of the South Island is scenic but inhospitable. More than that actually; it is immediately deadly for a family who came from England in 1979. The New Zealand characters are deceitful and venal. They lie and manipulate children. The life they lead is close to savagery. You might be surprised to learn that The pointing stick is by no means an outlier in our national literature. The New Zealand literary landscape is full of dark characters and even darker events: physical and emotional isolation, hidden trauma, sudden violence and death. Perhaps there has never been such a chasm between how a nation is perceived and how it is portrayed in fiction.

The first thing to consider when considering why this might be true is New Zealand’s geographic isolation. We are far not only from anywhere, but from everywhere. New Zealand was the last major landmass on the planet to be colonized by humans. Polynesian settlers, in a magnificent feat of navigation, deliberately sailed south from Polynesia, discovering Aotearoa around 1300. The rest of the world only arrived in numbers after English captain James Cook mapped the coastline in 1769. Inevitably, the meeting of cultures was traumatic. for Maori. European diseases decimated the population. Traditional tribal lands have been lost through both purchases and scheming. The bloody inter-tribal Musket Wars were followed by the Land Wars from 1845 to 1872, which resulted in the confiscation of Maori land.

It is significant that even today there is almost no local fiction that realistically addresses the early colonial period or the clash between Maori and Europeans, apart from a rather ‘Boys’ trilogy of novels Own Adventure” by Maurice Shadbolt (1932 – 2004), beginning with Season of the Jew (1986). Some academics argue that there was a deliberate forgetting of this era by mainstream European culture, a rather culpable diversion of gaze. Instead, Europeans have developed a smug myth of cross-cultural harmony. The narrative of the dominant culture was that the Maori lived happy, mostly rural lives, content with what they had, and that colonization had done them far less harm than it had done to most indigenous peoples. of the world.

In the early 1970s, the first published Maori novelists, Witi Ihimaera (who was motivated by the complete absence of fiction depicting Maori life) and Patricia Grace, tended on the whole to emphasize the positive aspects of Maori culture. It wasn’t until Alan Duff Once upon a time there were warriors (Tandem, 1990) and the internationally acclaimed film adaptation in 1994, which we have obtained a angry and visceral literary description of the traumatic impact of colonization on the contemporary life of Maori, especially urban Maori. The main characters Jake and Beth Heke lead lives marred by poverty, alcohol, gang culture, violence and general despair. The book deals with domestic violence, child neglect, rape and teenage suicide. Once upon a time there were warriors was described in one review as “a kick in the guts of New Zealand’s vaunted pride in its Maori/Pakeha (European) race relations”. (A related idea was expressed recently (and more succinctly) to the world media by Kiwi director Taika Waititi when he claimed that New Zealand was “racist as shit.”) Duff continued to exploit these themes in a series of dark novels, including Steal One Night (1991), State ward (1994) and two suites Once upon a time there were warriors.

A more recent novel showing that things have not changed much in the last thirty years for some Maori is the novel Oh by Becky Manawatu, (2019) who won New Zealand’s premier literary award for fiction, the Jan Medlicott Acorn Prize in 2020. Aue is a cry of lamentation. The themes of this book are also central to this country’s best-known novel, Booker Prize-winning Keri Hulme, The people of bones (Spiral Collective, 1984). At the time, some critics were critical of Hulme’s detailed descriptions of the domestic abuse inflicted on the mute foundling Simon, by his adoptive Maori father, Joe.

It is not only the Maori colonial heritage that has contributed to the dark side of our national literature. In the 1980s I had a lecturer at university, Professor Patrick Evans, who claimed in his typically controversial and amusing way that New Zealand literature “began in 1882 with the introduction of refrigerated shipping”. His thesis: before 1882, New Zealand was the Eden of the settlers, a pastoral ideal in the Pacific. After 1882, however, we were essentially a country devoted to the breeding and mechanized slaughter of sheep and cattle. The New Zealanders had blood on their hands. Every Kiwi could lie in bed at night and listen to the silence of the lambs. Patrick had many examples of his “slaughterhouse fiction”, including several gory incidents from the stories of Katherine Mansfield (1888 -1923). His best example (exhibit A for the prosecution) was the novel Sydney Bridge upside down by David Ballantyne (1924 – 1986) first published in 1968, when the book was largely ignored (or ridiculed for being too mean), but successfully reissued in 2010 by Text Publishing. At the heart of this novel is a teenager who is superficially polite and friendly but has the cold heart of a serial killer. Most of the action (and bloodshed) takes place in an abandoned butcher shop by the ocean. Another writer Patrick liked to quote was Ronald Hugh Morrieson (1922 – 1972). Morrieson’s novels feature (in no particular order) lust, murder, necrophilia, drowning, and human immolation. His best known, The Scarecrow (1976) has the opening line, “The same week our poultry was stolen, Daphne Moran had her throat slit.” Darkly shiny.

There have been other national traumas that inevitably appear directly and indirectly in our literary landscape. Because we are a series of islands with many rivers, in the early 20th century drowning became known throughout the Commonwealth as ‘the New Zealand death’. I can think of several literary drownings off the top of my head. My Favorite Drowning-Based Novel Is Kirsty Gunn’s Little Masterpiece Rain (1994). at Maurice Gee To the west (1992) is also excellent.

However, the greatest national trauma was undoubtedly the First World War. Out of a total population of around one million, New Zealand sent 100,000 troops, mostly young men in their twenties. 18,000 were killed. Another 25,000 returned injured. None of the bodies of the dead came back – it was too far, too impractical. Drive through any city in the country today and you will see stone memorials to the war dead. Often the names are repeated; brothers, cousins. Mothers, fathers, sisters, younger brothers – anyone too young or too old to leave – found themselves with nothing but a few pictures and a name etched in cold sandstone or marble in a park or on a nearby hill. Almost everyone was affected directly or indirectly.

To make matters worse, soldiers who returned in early 1919 brought with them a particularly deadly strain of flu. The “Spanish flu” has largely affected New Zealand with a far higher death rate among young and previously healthy people than Covid 19. New Zealand and small rural communities have been hit very hard, with Maori being hardest hit. 9,000 New Zealanders died, most within two months. At least this time the bodies were buried near their home.

As with the early colonial land wars, there is surprisingly little fiction dealing directly with World War I, its impact on those who stayed or those who fought, or the Spanish Flu. (For fifty years they weren’t even touched upon by non-fiction). The cultural attitude was ‘leave it behind’ ‘go on with life’. However, these overlapping national traumas, along with the colonial legacy, sowed the seeds for the tension of fiction that slowly formed over the rest of the 20th century. Eventually it takes the form of recognizably New Zealand literature dominated by themes of physical and emotional isolation, cultural conformity, repression of dark secrets and urges, and sudden acts of violence and death. .

It would take a much longer and more detailed article than this one to look at all the possible examples. If you’re interested in a deeper dive, I recommend starting with Frank Sargeson’s short fiction, “The Father of New Zealand Fiction.” Sargeson (1903 -1982) was a gay man in what was a judgmental and sometimes petty and vindictive culture. His characters are often damaged and in some kind of hiding – from themselves as well as others; the stories fizz with the pressure of repressed lust and the inherent danger of “normal” people. The same darkness (and more) can be found in the work of this country’s greatest novelist, Maurice Gee (1931 – ). In remarkable work, for adults and young adults, Gee has made a career out of illuminating the hypocrisy and dark side of New Zealand’s conformist society and the violence that is always just below the surface. In the novel A crime story (1994) a woman is paralyzed after being pushed down the stairs by a young burglar. In the fat man (1995) a petty criminal returns to his hometown to punish his childhood bully – and the bully’s son. living bodies (1998) reimagines the true story of a German Jew who fled Germany in the 1930s for New Zealand in search of safety, but was incarcerated during the war years on a small island swept by the wind in the middle of Wellington Harbor alongside the Nazis.

As a final glimpse into the darker side of the New Zealand character, I recommend Owen Marshall’s short fiction. His history Coming home in the dark was recently adapted into a feature film. As anyone who has seen the film or read the story knows, the horrific ordeal facing an average New Zealand family is a nightmare. it doesn’t get any darker than that.

Welcome to New Zealand. We hope you enjoy the beautiful scenery. People are friendly.

“Children with access to good literature thrive as citizens”: The Tribune India