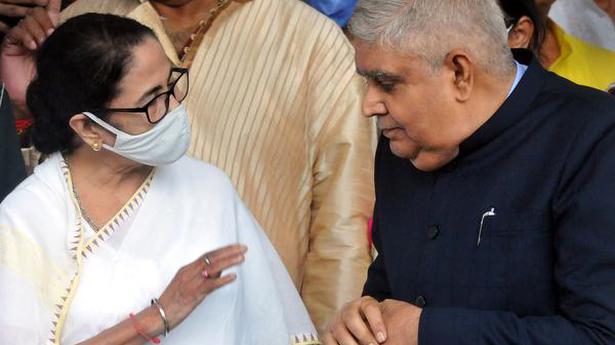 The war of words between Mamata and the governor continues

The war of words between West Bengal Chief Minister Mamata Banerjee and Governor Jagdeep Dhankhar refuses to die down. Two days after she said she had blocked Mr Dhankhar on Twitter, the Chief Minister targeted him again on Wednesday referring to an incident during Republic Day celebrations when a mounted police horse Kolkata was offline during the parade.

“They sent aGhorapalhere… This incident came to my mind because on January 26, I was looking at a Gendarmerie horse. The horse has also learned that there is a Ghorapalhbefore. He resisted too. The Trinamool Congress has no role to play in this,” Ms Banerjee said to cheers from party workers who had gathered for party organizational polls in Kolkata.

The Chief Minister did not directly take the name of Governor, but using the term “Ghorapal“it looks like”Rajyapal(Governor),” she clarified that she was referring to Mr. Dhankhar. “ghoral » is not a word in the Bengali language, but “Ghora” meand a horse.

The chief minister went on to say that the governor was calling officials without the consent of the state and that she had put up with this situation for a year and a half.

“There is no democracy in Bengal… there is only violence in the state… there are murders and atrocities against women in the state, as if there is sat and watched everything through binoculars. What is going on in UP, in Delhi, in Tripura, has he ever tried to find out? Ms Banerjee said reiterating the same series of allegations she made against the constitutional leader on Monday.

The Chief Minister went on to say that “someone who could not be elected councilor and who had changed parties ten times” was lecturing an elected state government on constitutional issues and plans for state government. State.

Hours after Ms Banerjee made the remarks, Mr Dhankhar replied that the chief minister’s words “amused and surprised him”. “A particular horse may not have been online. She used this incident to mean that the horse was pointing at me. Where are we going ? he wondered.

Mr Dhankhar stressed that “the governance of a state was in accordance with the rule of law” and that the chief minister was making outlandish allegations against him. As constitutional officials, he and the chief minister must maintain “civility”, he stressed.