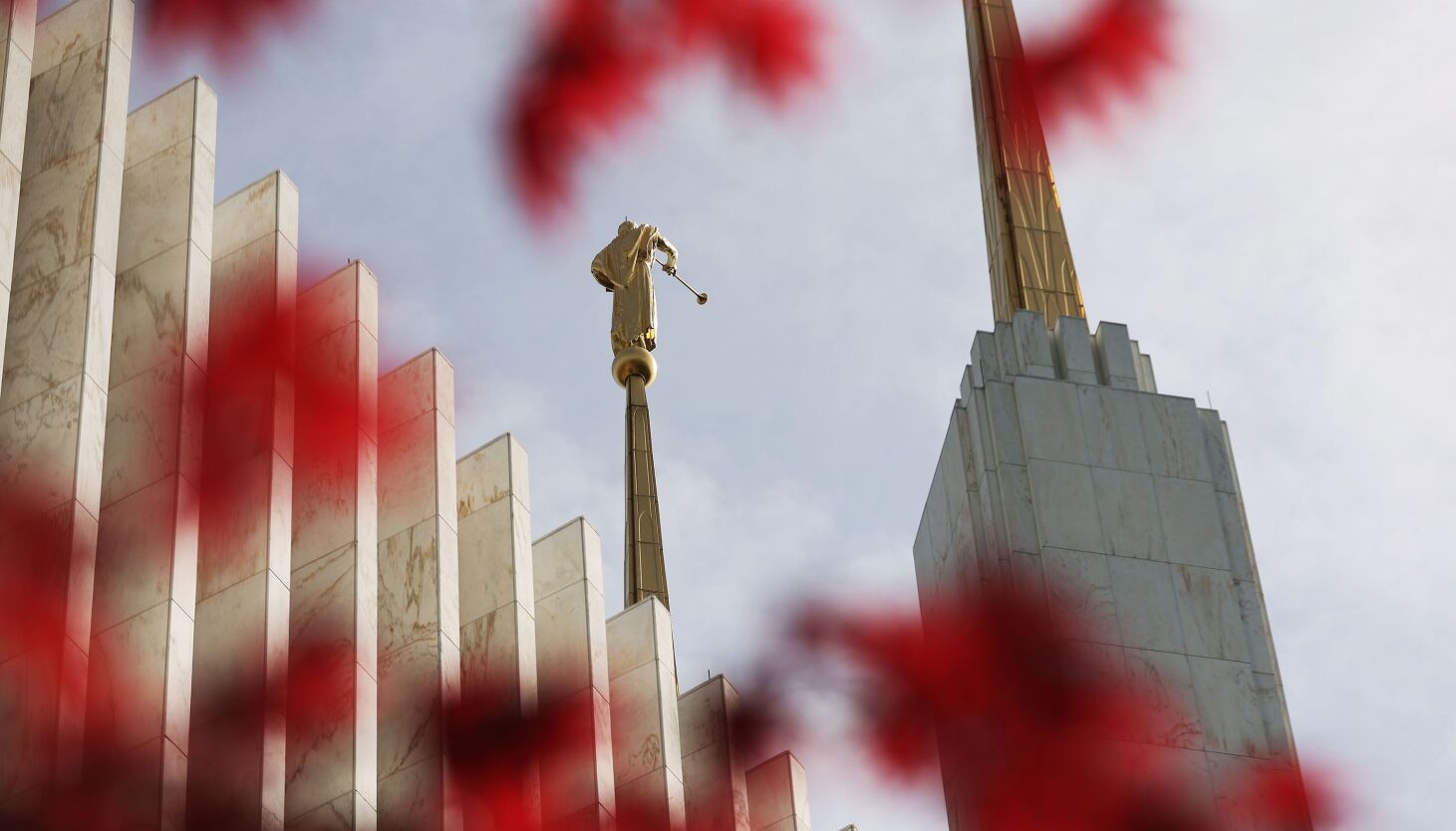 This article was first published in the ChurchBeat Newsletter. Sign up to receive the newsletter in your inbox every Wednesday evening.

After the first press conference on media day for the Washington DC Temple Open House, I was assigned with other reporters for a tour of the temple.

Over the next hour, an apostle shared fascinating details about the temple’s renovation with reporters, many of which related to light and lighting. Here is part of what Gerrit W. Gong of the Quorum of the Twelve Apostles said:

The interior lighting of the temple

When Brother Gong sat us down in a sealing hall to talk, a reporter shared his impression of the celestial hall and its chandeliers.

“I felt like it was the spirit of God coming out of the lights,” he said.

Brother Gong then drew attention to the lighting in the sealing room. A few days earlier, two other apostles had led a CBS Sunday Morning film crew on a special visit to the temple. Crew members quickly noticed that the temple was so evenly lit that they didn’t need the typical lighting equipment they carry with them everywhere.

“There is such a special light, you don’t see any shadows,” Elder Gong said, prompting reporters to look around the room.

David A. Bednar spoke about the film crew’s reaction in a new Church News video. He and Elder Gong said they would be interested to notice in the future if the lighting in other temples was similar.

The magnificent stained glass windows of the temple

The stained glass windows at both corners of the temple affect its lighting, inside and out.

During the day, these windows let light into the temple. At night, the light from inside the temple, brilliantly colored by the stained glass window, casts onto the ring road of the capital from the hill on which the temple sits.

After 48 years, however, the stained glass window needed work. Leaks had formed between some of the glass and the frames, as some of the epoxy between them had deteriorated.

“Each of these colored stones was individually removed and repolished,” Elder Gong said. “The leaks have all been sealed.”

He said the windows had a special meaning. He had previously spoken of the seven floors of the temple. At 288 feet, the Washington DC Temple is the tallest of The Church of Jesus Christ of Latter-day Saints temples. (The Salt Lake Temple is 210 feet tall. Both measurements include the spiers.)

He said he hoped reporters in the DC, Maryland and Virginia area would remember the stained glass.

“I hope when you go around the ring road and see them, you’ll think I have to see them from outside and inside,” he said.

The exterior lighting of the temple

The temple revealed how its exterior interacts with light during 10 days of tours for guests ahead of the open house which kicked off April 28.

“There are two things about this temple that look different,” said Dan Holt, the renovation project manager.

One of them is the gold-plated arrows, which shone brightly on sunny days and looked much more golden on rainy and cloudy days.

The other is the white Alabama marble of the exterior walls of the temple.

“The color of the marble itself also changes with light reflection and the time of day,” Holt said. “So someone will come up and say, ‘Oh, there’s a lot more veins in there. What have you done?’

“It’s almost like it’s alive,” he added. “It just reflects light. Some days it’s almost a cream color, and then there are days when it looks gray and a little softer.

Find out which national leaders have visited the Washington DC Temple, from the Supreme Court to Congress (April 28)

The Church News continues to produce interesting videos on selected church events. Here are three from the Washington DC Temple Open House that I recommend:

Reverend Theresa A. Dear, National Board Member of the NAACP, shared her thoughts after a memorable visit to the Washington DC Temple.

The Wilford Woodruff Papers Foundation acquired his personal Bible and six volumes of journals written by one of his 18 sons, Asahel Hart Woodruff. Learn more here.

Church leaders held the dedication ceremony for the Farmington New Mexico Temple in the Four Corners area on April 30.

KSL NewsRadio celebrates its 100th anniversary on Friday. Read what Doug Wright, Amanda Dickson and others say about their memories and service from Utah at the church-owned station.

Why do most college football players struggle to adapt or succeed in the NFL? This piece argues that the reason is that the on-field markings make professional American football a different game than they played in college. It will make you look smarter.

The Sistine Chapel Traveling Exhibit is currently in Salt Lake City and may be traveling to a city near you. Here’s a colleague’s take on the exhibition’s surprising strengths and weaknesses. I want to go see him.

I have long been fascinated by apologies. When famous people get into trouble, they often don’t accept full responsibility for their mistakes or mistakes. My least favorite excuses are “to those I may have offended”. It’s blaming, not apologizing. So I’m always looking for models of accepting responsibility. Here’s a fresh one from the world of baseball. A Philadelphia player made three errors in a game and was booed unceremoniously. He was caught saying to a teammate, “I hate this (absolutely empty) place.”

“Listen, emotions got the better of me,” Alec Bohm said as reporters swarmed him in the locker room after his side came from behind to win the game. “I said it. Do I mean it? No. It’s a frustrating night for me, obviously. I made a few mistakes on the pitch. Look, these people, these fans, they just want to win “I mean, you heard it. We’re coming back, they’re great. I feel sorry for them. I don’t mean that. Emotions just got the better of me.”

A reporter asked another question: “So you really like this place?”