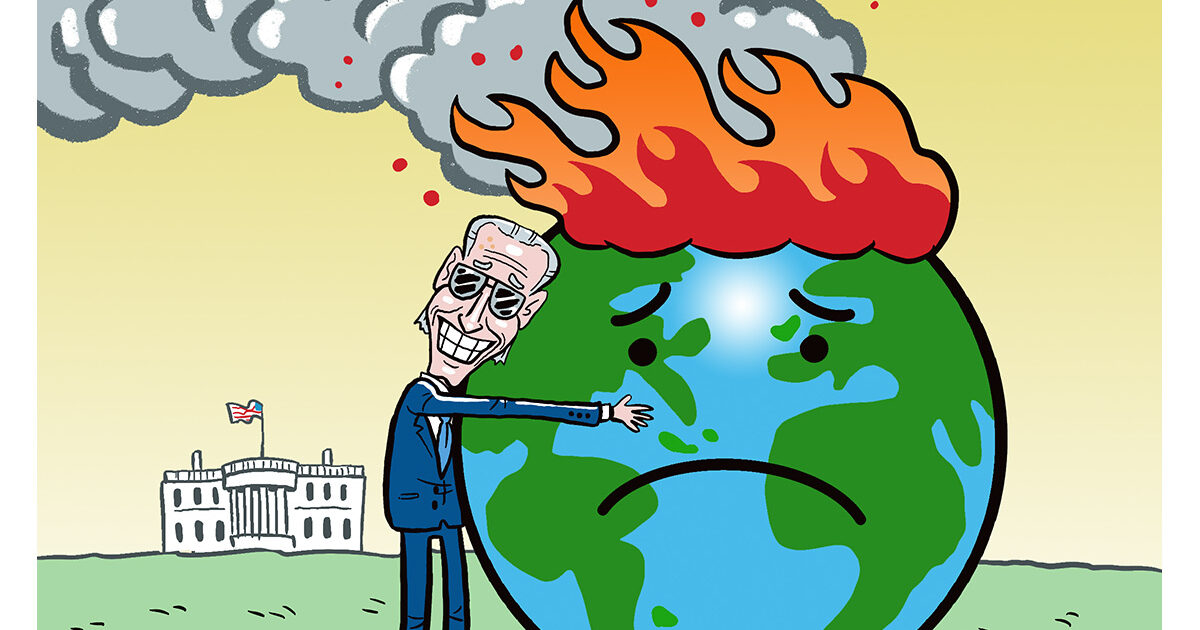 We don’t have time for climate symbolism

Reader donations, many of which do not exceed $1, have kept In these times publishing for 45 years. Once you have finished reading, consider making a tax deductible donation to support this work.

President Joe Biden, like many Democratic leaders, has shifted his rhetoric on climate change into more dramatic tones in recent years. Beginning with his decision to re-enter the Paris Agreement, glowing headlines announced Biden’s climate plans. But when it comes to moving the United States away from fossil fuels, Biden, like so many others, is light on substance.

While the GOP advances outright climate denial, many Democratic officials argue ​“climate symbolism. Their rhetoric recognizes the urgency of climate change – with words like ​“existential threat, ​“emergency,” ​“crisis” – but their guidelines call for big changes in the distant future, ignoring immediate actions that could actually help.

The Paris Agreement, for example, is loaded with climate symbolism, with promises well below what is required. Biden has also pledged to move to 100% ​““carbon-free” electricity by 2035 but has not yet implemented a detailed plan. And when it comes to fossil fuels, Biden has largely overhauled Obama-era policies that proved insufficient to reduce atmospheric carbon.

During the campaign trail, Biden was adamant about stopping fracking on public lands. Not only has he failed to deliver on that pledge, but his administration is appealing a federal court order that halted fracking in Wayne National Forest. She also championed a project in Alaska to 100,000 daily oil barrels for the next 30 years. Biden did not stop the line 3 pipeline, and the Dakota Access Pipeline has been given the green light by a federal judge, even as the International Energy Agency says we must stop fossil fuel infrastructure development.

Biden’s top priority, his proposed bipartisan infrastructure package, pales in comparison to the $16 trillion climate plan that Bernie Sanders proposed in his campaign last year, which 57 scientists approved as necessary to save the planet.

The crux of the matter is Biden’s reluctance to take on the fossil fuel industry. Instead of a solid plan to end drilling, his administration promotes industry support ​“solutions” such as carbon capture. But in power plants, carbon capture has cost billions of dollars without removing a significant amount of emitted carbon. Filtering the carbon directly from the air is even more fanciful. The United States emits approximately 6.5 billion metric tons of carbon dioxide equivalent per year. To delete even 1 billion tons by direct capture in the air would monopolize almost all of our annual energy production, according to a study.

This industry-friendly approach is mirrored by Biden’s team. Biden’s Energy Secretary Jennifer Granholm touts increasing liquefied natural gas exports as a solution, while climate adviser Gina McCarthy (who has hampered the fracking industry in the Obama administration as head of the Environmental Protection Agency) made it clear that ​“administration not fighting oil and gas,” according to a White House summary of a meeting it held with oil and gas companies in March.

FDR, speaking of the utility industry and its efforts to promote public power, implored voters to judge him by his enemies. In the case of climate change, Biden’s approach must be judged by the ones he refuses to take.

The same dynamic appears among Democrats at the state level. Minnesota Governor Tim Walz has called climate change a ​“existential threat that affects all Minnesotans,” but did not step in to stop the line 3 pipeline, the equivalent of 50 new coal-fired power plants in terms of carbon emissions. Pennsylvania Governor Tom Wolf has called climate change ​“one of the biggest and most critical challenges we face,” while accepting more than $78,000 in campaign contributions from fracking interests and proposing taxes to generate revenue from natural gas extraction rather than outlawing this devastating practice altogether. New Mexico Governor Michelle Lujan Grisham called climate change a ​“crisis”, but took $50,000 in campaign contributions from oil and gas interests and reliably promotes drilling.

In California, Governor Gavin Newsom tweet dire warnings about the existential threat of climate change as he approves new oil and gas permits. He ran on an anti-fracking platform, but later claimed he had no authority to ban fracking, asked the legislature to do it for him, then ignored it. introduction of a state bill that would have it. After public backlash, Newsom ordered a regulatory agency to ban new fracking permits, but that won’t go into effect until 2024 and may not cover cyclic steaming, a particularly intensive extraction method prevalent in California. His much-vaunted statement that California must phase out oil production made national headlines – but the proposal would not be fully implemented until 2045.

Even New York Governor Andrew Cuomo, who banned fracking in New York State in 2014, is big on climate symbolism. He stated ​“we need to replace fossil fuel with clean energy” in January, but has several fossil fuel expansion infrastructure projects on hold.

Yes, recognition is better than outright climate denial. But that will not prevent the runaway climate chaos. According to the United Nations, we cannot increase natural gas production without overcoming the global warming cliff of 1.5 degree Celsius.

There is no more time for token promises. We need leaders to directly and shamelessly attack the fossil fuel industry and fight to keep fossil fuels in the ground. Anything less is more hot air.